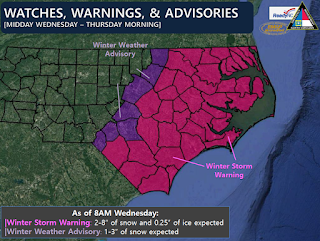 A Winter Storm Warning has been issued for the Coastal region and a Winter Storm Advisory has been issued for portions of the Piedmont and is in effect from midday today through Thursday morning. The Winter Weather Advisory has been expanded westward to include the Triangle and Fayetteville areas. All points west of US 1 (including the Triangle) could accumulate 0-1” with all points west of US 1 expected to get nothing, although a dusting is possible in the southwestern Piedmont. Significant snowfall totals are expected with as much as 3-4” along and east of I-95, 4-8” in the northeastern Coastal counties where at times snowfall could lead to upwards of 2 inches per hour and localized totals could be as high as 10”. Expect precipitation to begin as freezing rain, generally around noon to early afternoon, transitioning to snow by mid to late afternoon. Ice accumulations have increased to as much as 0.15-0.25” within the Central Coastal counties. Scattered power outages are possible given increased iced totals and gusty winds.

The largest forecast concern remains with the western extent of the low but the cutoff line will be abrupt with a very sharp gradient between getting no snow and Advisory Criteria. Confidence is high that the bulk of the precipitation will be snow, although there is a dry layer that will allow snow totals to be slightly lower in some areas.

Very strong winds for coastal locales as well as coastal flooding for the sound side of the Outer Banks (Dare and Hyde) is possible. Winds could reach 35-45mph with gusts up to 60mph. The NWS has issued a high wind warning (Midnight - 8AM Thursday) for the Outer Banks and Wind Advisories (Midnight – 8AM Thursday) for Mainland Dare/Hyde, Tyrrell, and Carteret counties. The strongest winds are expected between midnight and early Thursday morning as the low makes its closest approach. A Blizzard Warning is also in effect (4PM Wednesday - 1PM Thursday) for the northern tier of counties and northern Outer Banks as blowing snow may cause whiteout conditions during the times of highest winds.

Precipitation will freeze and accumulate on contact as road surfaces, especially bridges and overpasses, are below freezing. Hazardous conditions will be present shortly after precipitation begins to reach the surface so if you are not at your destination, drive SLOW and be mindful of unsafe driving conditions. If you must be out on the roads, make sure you have basic items on hand: scraper, jumper cables, tow chain, blankets, flashlights, first aid kit, and a road map. Let someone know your destination and your ETA in case something happens but have your cell phone charged in case you need to call for help. While temperatures shouldn’t fall much more as high clouds are beginning to filter in from the southwest, most areas remain well below freezing. Be sure to heat your home safely in these below normal temperatures. Be careful with candles and any open flames and be sure to keep any decorations or fabrics away from space heaters and fireplaces.