The time we went Snow Tubing at White Deer Resort... SO before winter was over I wanted to do snow boarding LOL....so I decided that we would do tubing b/c I didn't have enough money to get us all boards...but I did get us the snow clothing gear, goggles, hats, pants, etc....it was s debate between White Tail or SnowShoe... So I said what the heck we'll go an hour away to White Tail. Whitetail Ski Resort in Mercersburg, Pennsylvania. At just an hour and a half from either Washington DC or Baltimore, Whitetail Ski Resort provides a perfect opportunity for a quick getaway for people in the DC, Virginia or Maryland area. SO when we get to this mountain hahah I was like OMG, it was no snow, then all of a sudden you see this mountain and then you see snow 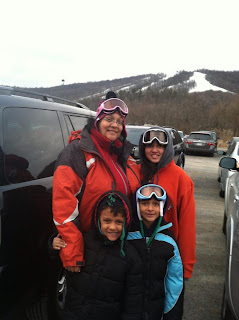 Off to the side from the ski mountains, the snow tubing area offers 10 "groomed lanes". The lanes are all side by side and vary from one smooth descent down the hill to several up and down hills during the descent. The side by side launching area gives a great opportunity to try all the different variations of snow tubing including: tying your tube to other people to ride down together, taking a running head start and going as fast as you can and racing against somebody in the adjacent lane. Additionally, there are two person tubes in the shape of a figure 8 that people can ride down together in.

Don't be fooled, while the snow tubing mountain might not all that fast, you can build up a great deal of speed!  Whitetail is perfectly entertaining and safe for anybody over 5 years old. For children younger than that, there is a tiny tubing area off to the side. 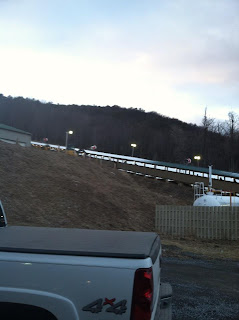 We got down that mountain in 0.5 sec and Bran screamed all the way down needless to say we went once!! He didn't like it. It doesn't look that steep until you are sliding down the mountain!
EVEN before we made it down the mountain we had to ride up this conver belt thingy. HAHA OMG that was the funniest thing in the WORLD, my mom was taken out by my clumsy 11 year old who dropped her tube. It slide down, knocked my mom forward and then while we were riding up, my mom flipped backwards and kept rolling. This is what Cat took grandma out going up with her inner tube.

You see that green roof, it had the moving standing lift. So while my mom was rolling backwards it jammed up the lined, so they stopped it and then my mom was like "forget this" I'm walking on the side, and the lady was screaming get back on. So my mom finally did, and then she jumped off and Cat kept riding it when she was suppose to get off, and fell into the guy who was at the end, it was HILARIOUS. So at the top, I was like, "Mom ride with Sam, I'll ride with Bran and Cat you go in between us". So WE must have gotten on the FAST LANE, b/c before I knew it my mom was half way down the hill with Sam, and then I was like ok Cat go, so I pushed her off, and then with Bran it was like ok you ready and down the first bump, it was ok but when we did a 180 degree turn and was going backwards that's when my son was like, "stop, stop, I want to get off"OMG it was too funny. Cat was like I want to yell "BooYaKaSha" so instead of her yelling it she was like "ok get it together Cat", and whispered it..she said she was scared too. So as Bran and I came in backwards the man was like OMG they are coming in backwards, and all I could think was, how am I going to stop, and Bran was like we are going to smack into the wall or fall off the cliff....LOL It was TOO FUNNY.... I wish I had someone videoing it. 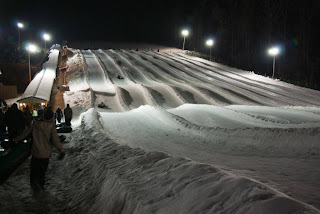 Don't worry about the weather because they make their own powdery snow. They also groom the lanes daily and during the day they smooth out and ice the lanes to make them faster and more enjoyable. A two hour session is $20 on the weekend and $16 during the week; while a one hour session is $16 on the weekend and $12 during the week. You can enjoy the snow tubing during the day, or go under the lights up until 10 pm.
You see that 2nd lane from the left of the photo that's the one we were in. HAHAHA OMG it was hilarious, it was happening so fast that I didn't have a chance to be scared b/c I was trying to keep my son calm. I totally wanted to do it again..ahh maybe next year...but I am going to wait to take my son again, so I know he isn't ready for a roller coaster....