My Lego Birthday Party for kids...Sam is 8 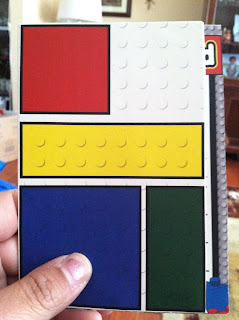 So for the record this is like my third themed birthday party (Check out my last Themed Party Alice in Wonderland) I am PRETTY IMPRESSED, it turned out so awesome!....I wish I had more time to be more artisty and creative, I would totally have pulled out my cri-cut machine and went to town! Ok so my post is really photo heavy.. 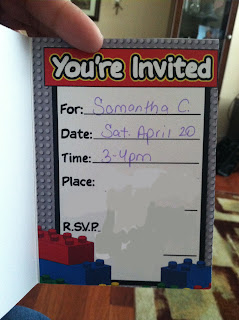 Ok so who said Lego's are for boys? No just kidding, I was pretty bummed that all the Lego stuff I found online were for boys, but that's ok, we made it out to be for girls. Now Sam isn't much of a princess and doesn't like girlie things, so I bought her a blue tiara, and she was like NO thank you..but she did wear the fairy wings and wand...I was pretty surprised she wore the pink dress, but I think it was because it had white pants with it. Sam is my mini me, I remember I hated to wear dresses when I was a girl, and I loved to play with boy toys like race cars, trains, swords and stuff, I even wanted a bow and arrow. SO while I was like "ehh" it turned out SWEET! This was the first time she had boys and girls at her party and I think it was a hit because none of the kids wanted to go home! 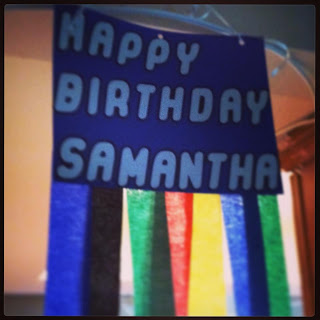 I had planned it out and pre-printed everything but the day of the party I was running out I felt like I was in a million places, my thoughts were all over the place, I think I was doing 6 things at once (baking the cake, making the candy marshmallows, cutting the bologna and cheese, wrapping boxed and decorating), so while it went smooth I was still pressed for time, but things did turn out GREAT, and no one wanted to go home...I should have made it an hour and half, because an hour we didn't get to finish everything I wanted too do. My goal was to keep the party simple and fun. 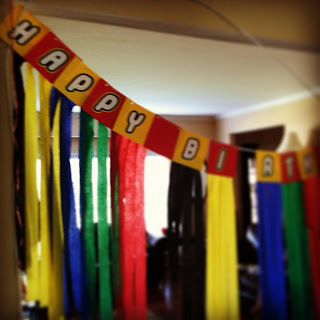 SO Sam wanted a Lego Birthday Party and it was pretty easy to do. I made the Lego invites, Lego gift bags, the Lego banner, some party decorations and played pretty cool games..I am sure you all are like me....having a family on a budget I’ve learned to get a little creative with birthday party planning for my kiddos. So usually Sam get's the crappy bday parties....either we are moving to an new place, her bday falls around Spring Break, or the Army...so  when I asked her back in Feb what type of party she wanted she requested a Lego party I knew this was something I could definitely have fun with. 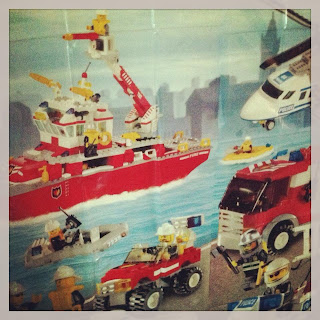 The Lego Invites I used cardstock from Micheal's and the front and inside cover were just blown up pictures I found on the internet. My oldest daughter helped me glue, and we trimmed up the edges, and Sam read me all the names of her class. I was nervous she had invited 25 people and I was so nervous b/c I didn't prepare for 25. I only maybe prepared for 10, and we ended up with 15 kids. I want to give a shoutout to Cat, she was my helper and was in charge of the events! Totally AWESOME! 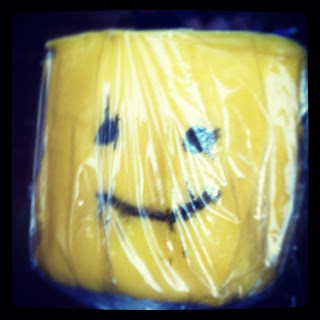 I searched HIGH and low on the internet, and I am so glad there are some moms who went before me and posted their pics, THANK YOU Moms out there...so mine didn't turn out exactly like theirs I am not really good when my ideas come out, they have that homemade touch and nothing like professional quality, it still has that certain homemade look, no matter HOW MUCH I GO TO THE WILTON CAKE CLASSES it is never SMOOTH. Just saying it still looks like waves on the cake but hey my kids loved it and asked for me to bake another! So we will see, because I don't want her sugar to get too high. I also watched out for the sweet factor, I didn't have much sweets other than the cake.

I made bologna in the shape of stars, and cheese in the shape of flowers, and we have regular club crackers the kids could make a sandwich. We also had water to drink, no juice here, we have converted to water, (only if I could get my kids to take water to school instead of juice we would be AWESOME). 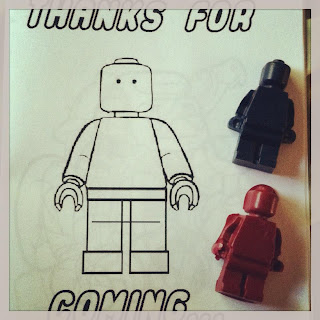 I  am a Pinterest junkie and blogger junkie. It’s amazing what you can find on there! I gathered a lot of my inspiration from other bloggers on their Lego parties! The banner was handmade, I found the Lego font and printed the letters of Happy Bday out, then I just glued them to red and yellow small card-stock squares..then I just used streamers and taped them to the back of the cards, and it made for a CUTE BANNER! I just went to the dollar store and got all primary colors for streamers, table clothes, silverware and plates and all the party bag goodies. I went to Michael's and got the gift party bags, and Cat helped punch out the circles and we glued them on the bag. 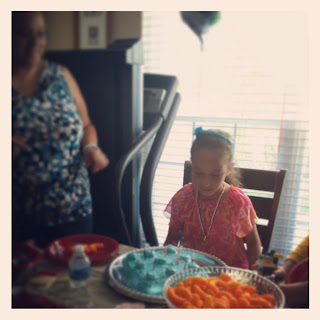 Making the birthday cake from scratch is always a tradition in our house and a good way to save money..besides I just don't like the icing from stores, I detest whipped and the butter-cream just doesn't taste good here. It was just a vanilla pound cake was topped with homemade butter-cream icing.It was pretty cool, I used the gel food coloring, and it was a lot easier (but I did let the butter and Crisco mix together for and hour to get rid of the grittiness)..besides I don't like box cake flavors. 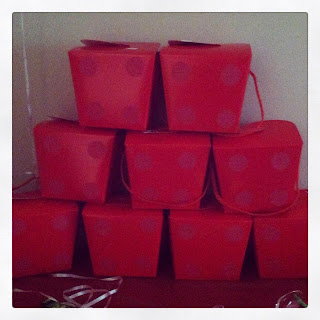 I also made jumbo marshmallows on sticks, dipped in candy melts, and finished with the Lego guy face—a big hit with the kiddos (I actually flavored the candy to taste like cherry). It was pretty fun, I think I want to make lollipops now...

So when the first guests arrived I had two crafts for the kids to do, "Color your Lego" and "Connect the Dots"....we also had the table in the middle of the room with all sorts of Lego’s. That was great as the guests were arriving to keep them busy and happy! I WAS so thrilled that two of the parents stayed because I think I would have pulled all my hair out and we would have just built the cars...and not played anymore...it was noisy but I am so glad the kids were happy!

We had a bunch of games on the inside due to the cold front than came through the night before (that produced a small tornado here in the area and the ground was really wet), so we only went outside once... 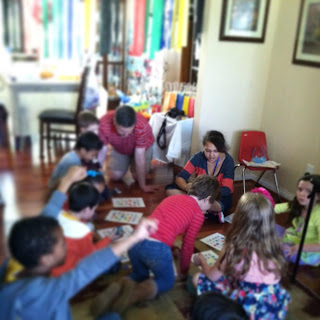 (1) Lego Hunt was postponed (b/c the yard was wet) so  I'll post it just in case you wanted some ideas. So what you do is pick 5 colors of Legos and the fewer colors like green were worth more points. So once they found all of the Legos, they had to do the math to see what their points were. The kid with the most points wins a prize!

(2) Competition to build the fastest car...then we raced them. 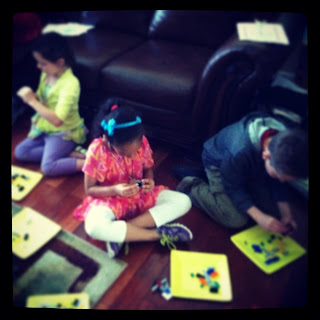 Then I put the Lego's in bowls by color and placed them at the end of the yard. Each team got a spoon and an empty bowl at the starting point. 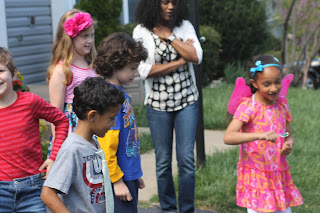 The goal was to run to the Lego bowl, grab a Lego and run back with the Lego in a spoon and drop it in the empty bowl. The team who filled their bowl first and ran through the finish line won a medal! If they dropped the Lego, they had to start over.

It was fun and everyone ended up getting a medal! I didn't want anyone getting upset, so everyone got a medal, or trophy b/c I ran out of medals! 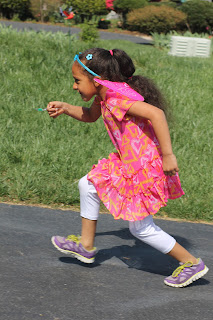 (Note I had one of the parents stand at the end of the yard, and the kids couldn't go past him, I didn't want them in the streets). 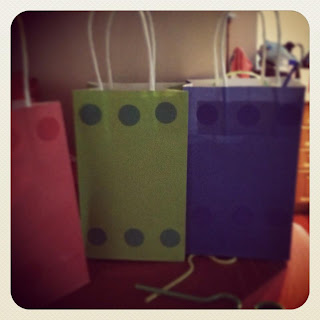 We sent each kid home with a goodie bag. Since the Lego store is here in NOVA, I went the night before and found all the pieces to make a car parts, so for the lego car race, I let the kids take their creations home. 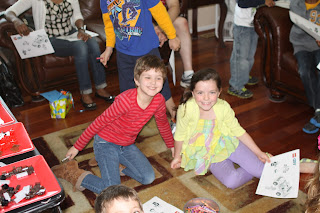 If you can get to a Lego store it really is a bargain. I did all of the goodie bags, plus the extra Lego’s for the guest and the Lego Game for under $15 (I also went to the dollar store and got bracelets (for the girls, sunglasses, tattoos, straws, and prizes)....we also did a pinata and the KIDS LOVED IT... filled it with the sour gummy worms, and one of the parents held it up and all the kids just did a dog pile and punched it with all the candy falling out...sorry happened too fast to get a photo..... So for the lego crayons, we bought the mold at the lego store, and just took pieces of old crayons and melted them in a pot and poured it into the mold then we set it in the freezer to harden. Which I THOUGHT WAS AWESOME! How cool is that to make a shaped crayon!
OH one more thing the Dollar Tree now sells the Mylar balloons for $1 and I bought 5 and they were the same ones at Party City, and they are still floating three days later! WHAT A STEAL! 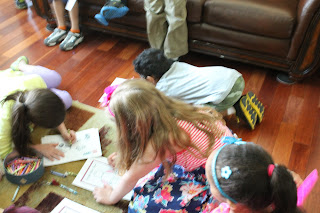 Sam had a great time and I am super excited she had all her friends over! I got a the coloring book from Aussie Pumpkin Patch.