Whose the Kernel in your life?

I was recently contacted by Kernel Season's Popcorn Seasoning in honor of National Popcorn Month (October)! I was lucky enough to try out the Kernel's Seasoning for popcorn! You know I had tried this before, but last week I GOT to try the BRAND NEW FAVORS!  They are asking all Kernel Season's fans to honor The "Kernel" in their life. Throughout the month of October, they are encouraging fans to post a photo of someone who is a hero to them on their Facebook wall, it could be a military hero, a community hero ,or even a personal hero. For EACH photo posted, we will donate an entire case of Kernel Season's seasonings overseas to the U.S. Troops.
As you can see I did the family taste test in the kitchen with popcorn and 6 tasters LOL..it passed the test, and it is kid approved in his household! I think my favorite was the bacon flavored! It tasted just like BACON! How did they get bacon to taste so good! I could totally see me using this on a baked potato...sounds like dinner tonight for me! I am doing my part and spreading the word, you should also pick this up and try it out. We also enjoyed the new movie Madagascar 3, out on Verizon FIOS...Check out the press release below: 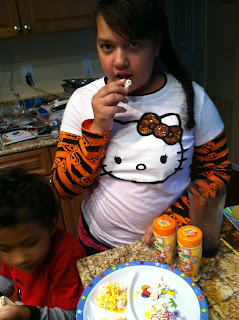 Elk Grove Village, Ill., October 1, 2012  – Kernel Seasons®, America’s number one brand of popcorn seasoning, is giving popcorn lovers another way to celebrate National Popcorn Month, while also giving back to those who serve our country.

For every person who posts a photo of a military, community or personal hero to the Kernel Season’s Facebook wall throughout the month of October, the Kernel will donate one case of popcorn seasoning to the U.S. troops via a partnership with Support Our Troops.

“Kernel Season’s has always supported the U.S. troops and is proud to celebrate their service with a promotion tied to our favorite month of the year,” said Brian Taylor, founder and president of Kernel Season’s.  “We encourage everyone nationwide to post photos of their heroes -- military, community or personal -- to our Facebook page.  We would love to give thousands of cases of popcorn seasoning to our troops so they can enjoy one of America’s favorite snacks and have some comfort of home while away from their families on assignment.” 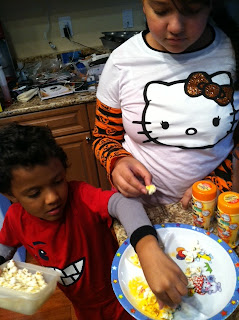 Kernel Season’s is working with Support Our Troops, a nonpartisan, nonpolitical organization providing millions of dollars in goods and services to the military community.  Over the past few years, Kernel Season’s has donated popcorn seasoning and popcorn products to this group in an effort to honor and recognize those who protect our country, our homes and our families.

For more information and to post your own photo and give back to our troops during National Popcorn Month, please visit Kernel Season’s Facebook page at http://www.facebook.com/KernelSeasonsPopcorn.


About Kernel Season’s
Kernel Season’s, headquartered in Elk Grove Village, IL, is the number one popcorn seasoning in the country. The flavors are all natural blends made with real cheese and are offered at more than 27,000 movie theatre screens nationwide.  They may be purchased for home use at more than 30,000 retail stores across America including Wal-Mart, Kroger, Target, Safeway, Food Lion, Publix, Winn Dixie, K Mart, Bed Bath & Beyond and Blockbuster Video.  Kernel Season’s products and popcorn accessories can also be purchased online at www.NoMoreNakedPopcorn.com.  Kernel Season’s product lines include:

To learn more, visit www.NoMoreNakedPopcorn.com and / or connect with us on Facebook, Twitter and Pinterest.  Retailers, food service professionals, brokers and distributors interested in Kernel Season’s products can call Jean Doyle, Regional Sales Director at 866-328-7672.  If you are a member of the media, please contact Rachel Kuna at 773-610-8454 or rachel@impressionspr.com.
Labels: facebook kernel National Popcorn Month Popcorn seasoning