How sequestration affects you as a military family.

A little TRUTH FINDING because so many facts have been tossed at people and if you don't know it isn't true or a person who you think would be telling the truth (like a community leader, and it doesn't have to be a political, it could be a person in the media business)....because in this political day and age it ISN'T the PRESIDENT who cuts budgets. The truth is budget cuts aren’t decided by the president, they’re decided by Congress. Unless lawmakers agree on a deficit reduction plan, across-the-board budget cuts will automatically go into effect starting Jan. 2. The cuts amount to about $1.2 trillion over 10 years and would hit defense and domestic spending equally. 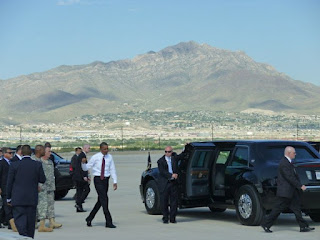 The President will focus on military issues this week. He is going to Ft. Bliss TX on Fri Aug 31. I am going to tell you, the military is completely different from being a civilian if you are just coming into it without any prior knowledge it's kinda scary. It is scary now to think about, and while I am not for budget cuts, I think we can dedicate some issues more wisely and allocate funds and move them around, or consolidate agencies, the idea of budget cuts in the military is scary and it affects my family and I.  Myself like several other military spouses fell that most civilians don't really recognize we are still fighting a war somewhere because it's not in their everyday lives.

Labels: affects you as a military family budgets President sequestration