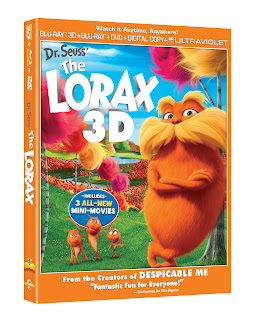 DR. SEUSS’ THE LORAX will arrive on Blu-ray™ 3D Combo Pack and Blu-ray™ Combo Pack (both sets featuring DVD, Digital Copy and UltraViolet™) on August 7, 2012 from Universal Studios Home Entertainment.
So I got to preview this DVD before it came out in the stores, my first impression, this was a GREAT movie!  But before I watched the movie, my kids and I read the book! The Lorax is a children's book written by Dr. Seuss which was published in 1972. It is mainly about the environment and the Lorax, who speaks for the trees against the Once-ler.I want to say thank you to Click Communications and Universal Studios Home Entertainment for letting me watch this awesome family movie.

It was really cute, and my youngest child loved it, all my kids loved it but S loved the part about pancakes, and she actually remembered the IHOP special was running when the movie was out about the seeds, she was like I still want to get a packet of seeds.  I liked the part when the Lorax was trying to get ride on the Onceler.

So the whole movie is about a Twelve-year-old boy named Ted will do anything to find a real live Truffula Tree in order to impress the girl of his dreams. So the girl wants a real live tree. So his grandmother tells him a story. A young boy residing in a polluted, grim world visits a strange creature called the Once-ler who lives in such seclusion that he never appears in full and only his limbs are shown. He pays the Once-ler fifteen cents, a nail, and the shell of a great-great-great grandfather snail to explain why the world is in such a run-down state. The Once-ler explains to the boy that he arrived in a beautiful, cheerful world containing happy, playful fauna that spent their days romping around blissfully among "Truffula trees."

The Once-ler lingers on in his crumbling residence, living in seclusion and remorse, while pondering over a message the Lorax left behind: a stone slab etched with the word "Unless". The Once-ler now realizes that the Lorax means that unless someone cares, the situation will not improve. The Once-ler gives the boy the last Truffula seed and encourages him to plant it so that Truffula trees can return to this damaged environment.

Here is what I got to review: The DR. SEUSS’ THE LORAXBlu-ray™ 3D Combo Pack will also include three brand new mini-movies


Universal City, California, June 5, 2012 – The colorful and captivating world of Dr. Seuss bursts onto the screen as never before on August 7, 2012 in the hilarious and captivating adventure, Dr. Seuss’ The Lorax from Universal Studios Home Entertainment.  Available on Blu-ray™ 3D Combo Pack and Blu-ray™ Combo Pack -- both featuring DVD, Digital Copy and UltraViolet™ so you can watch it anytime, anywhere -- Dr. Seuss’ The Lorax is non-stop family fun that includes three delightfully entertaining mini movies not shown in theaters,available only on the Blu-ray™ Combo Packs.  The film will also be available on DVD and Digital Download.   To view a trailer of the new mini movies, visit http://youtu.be/3DXU1348PHg

Featuring the voice talents of Danny DeVito, Ed Helms, Zac Efron, Taylor Swift, Rob Riggle, Jenny Slate and Betty White, Dr. Seuss’ The Lorax is filled with hilarious fun for everyone!
I received this DVD to write a review about the Lorax from Click Communications. All the opinions are my own!
Labels: 3D Dr. Seuss DVD Lorax Universal Studios Home Entertainment