My interview with JW, Brent, Tom, Talon, and Grady 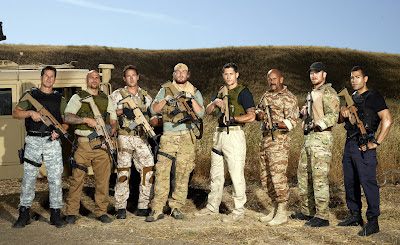 This is a follow up from my previous post on Stars Earn Stripes, which you can view on NBC Monday nights at 9-10 p.m. ET. I want to say thank you Bianca from Beck Media and Marketing in CA for making this happen...

So I was lucky enough to participate in the Stars Earn Stripes press and media conference call on Aug 24 with JW Cortes who is a current New York City police officer, Brent Gleeson who's a former Navy SEAL, Tom Stroup who's a current SWAT team officer based in Florida near Orlando, Florida, Talon Smith who's a current Navy corpsman based at Camp Pendleton and Grady Powell who is a recent Green Beret and has just left the service as well. I want to say that all the operatives are in great SHAPE, all ripped up and may I just say that Grady, Talon and JW are some HOTTIES!! They could totally do some modeling or something...just say they look badass! I just want to say GRADY HOOAH, I worked at Fort Bragg for a couple of Commands (82nd and USASOC), so I am going to give you the "All the Way Award, Airborne" just because you are army.

This was the first time ever participating in a conference call with actual people from a TV show. There were a few reporters and a few other bloggers on the line with me. The call went something like this if we had a question we would have to register it with the operator, and in the order of us pushing the buttons we went that in asking questions. Pretty sophisticated technology that actually recognizes the numbers pushed and captures who pushed them first.  I could have sworn I was the first person to punch in the numbers but Sammi Turano from TV Grapevine went first then it was Emily from Washington Post, and next was Jennifer a veteran and Marine Corp Spouse. They all had great questions such as

·        What is the most important lesson you learned about yourself while being on the show?
·        Nobel Prize winners had signed a letter saying that they thought the show kind of sanitized war by like getting it to an athletic competition. I was just curious what you thought about that or if you had any response to it?
·        How do you feel that this competition has helped promote the hiring of veterans?

The operatives gave great answers, to all the questions, basically they were saying in so many words that citizens here in the US are all sacrificing in one way or the other -- some more than others – JW stated it best, “ but at the end of the day what I'm hoping that this show will show is that you have a good guy from Brooklyn, New York City myself teamed up with a guy from Alaska and it never came into play. It never bothered us; it never was a question of whether or not we could get along. At the end of the day his son is still serving, we have all served and we continue to serve. And that's the common denominator on this show and that's a beautiful thing to see”.

On the note of the Nobel Prize winners, Tom summed it up the best,  “And unfortunately what I think happened -- and this is my perspective -- is that some people are politicizing this and confusing it with the war effort. Whether it's a war in Iraq or whether it's a war in Vietnam, it's always going to be about the soldiers. A lot of people who even gone to war have opposed the war but you still do it because you do it for someone else. And that's the sacrifice that soldiers and law enforcement officers make worldwide every day. This is not about politicizing the war, this is about raising awareness and appreciation for the effort that it takes to live in a country like we do. This is a free country because we defend our rights and we're willing to do things on a daily basis. I mean we just had a shooting at the Empire State building and the cops put themselves in danger to protect others.” 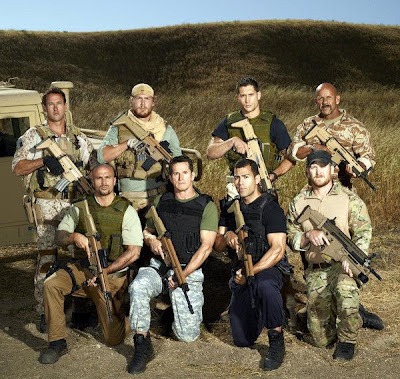 OK SO FINALLY HERE IS MY QUESTION…so you know it was only an hour call but I was like how many times do I have to push this code before she gets to me…and finally she said my name wrong and the name of my Blog wrong, I ch-auk it up to my southern accent during the registration process.

After all these serious questions I REALLY wanted to hear about the celebrities, you know lighten up the subject so are you ready here’s my question: On a lighter note how much preparation or training did the celebrities have to do? Like I see them there, they look incredible but did they have to do a lot of things to get in shape, you know, to get in shape or in get in the phase like the battle mind phases, things like that?

Grady just started laughing, as a matter of fact all the operatives laughed! Grady said “Most of the celebrities are coming from pretty fit lifestyles. I don't know what kind of selection process that NBC put them through prior to casting but they all came to it in great shape, honestly better shape than some of us operatives or the professionals on the show. As far as training while the show was airing, before each mission we were given the briefing and told what we were going to be doing and then the general would dismiss us to go do one-on-one training with our celebrity partner. And those would range from a few hours -- basically within a few hour ranges, an hour or so, two to three depending on how many different things we were hitting if we were doing weapons or confidence tower or low crawling. It just depended on how many activities we were taking on in that mission.”

They were all bragging on their celebrities talking about Todd Palin, Laila Ali and Nick was beating them through the mud pit, and how they had to step up their game. (OH I immediately thought about my husband b/c he always says that when he's doing a PT test,) JW was like I can’t have these people show me up, lol….they did say that two days after the mud event and they all sort of looked at each other and the next thing you know they went from kind of hanging out in the lobby in the hotel to hanging out in the gym. Tom said, “It's like okay we get it now. So we just kind of changed our strategy after that first event.”

So after the call ended, I remember that they are on twitter and so I went and sent a few a twitter messages to JW, Grady and Talon and they ALL tweeted me back!! Whoo Hoo..