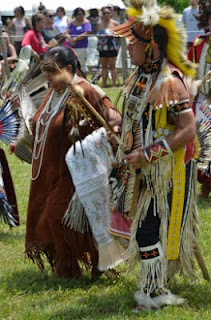 So I have been exploring my family,  and we have many histories, Scottish and German are big descendants in my family.

Until the middle part of the 20th century, the community was largely occupied in agricultural pursuits, sometimes supplemented by day wage labor jobs or jobs in nearby factories. In recent decades the numbers of people engaged full or part time in agriculture has declined significantly, and most working adults in the community now work in offices, or as skilled workers and craftsmen, or in the few remaining factories in the area.

The OBSN community is a lineal descendant of the Saponi and related Indians who occupied the Piedmont of North Carolina and Virginia in pre-contact times, and specifically of those Saponi and related Indians who formally became tributary to Virginia under the Treaties of Middle Plantation in 1677 and 1680, and, who under the subsequent treaty of 1713 with the Colony of Virginia agreed to join together as a single community. This confederation formed a settlement at Fort Christianna along the Virginia/North Carolina border in what is now Brunswick County, Virginia. The confederation included the Saponi proper, the Occaneechi, the Eno, the Tutelo, and elements of other related communities such as the Cheraw. All of these communities were remnants of much larger Siouan communities that had lived in North Carolina and Virginia in prehistoric times.

The Saponi confederation was closely allied with the Catawba confederation, and occupied several forts and settlements located in what are now Greensville County and Brunswick Counties, Virginia from about 1680 until the mid-18th century, when the last Virginia fort, Christianna, fell into disuse. They also continued to occupy fortified villages and other settlements in North Carolina into the mid-1700s during this period.

While maintaining distinctions among themselves (sometimes exaggerated by non-Indian contemporaries and by later historians), the various elements within the Saponi confederation had a common origin and were closely related, linguistically and culturally. Their final treaty with Virginia included an agreement among the four signatory groups to formally incorporate as one tribe under the name “Sapony.” In January, 1715, Virginia’s Governor Spotswood wrote a letter to the Bishop of London describing how he had “engaged the Saponie, Oconeechee, Stuckanox [Eno] and Tottero Indians (being a people speaking much the same language, and therefore confederated together, tho’ preserving their different Rules) immediately to remove to y’t place, which I have named Christ-Anna.” In June of that year, Spotswood wrote to the Commisioners of Trade in London that he had “…been for a good part of last Spring, employ’d in finishing the fortifications of Christanna, and in settling there a Body of our Tributary Indians to ye number of 300 men, women and children, who go under the general name of Saponies…”

Acculturated members of the confederation and their descendants gradually formed a settled community that, over time, became geographically and culturally distinct from the traditional community. Formal marriages and common-law relationships between Indians of the community and their European neighbors contributed to divisions between the settled community and more conservative community members. Documentary evidence of the existence of the acculturated community begins to appear in local records as early as the 1720s. As these records involve adults, it is likely the acculturated community dates back into the 17th century. A great majority of the tribe’s members can trace their ancestry back to the individual Indians identified in such records.

The acculturated community occupied a small tri-border area in what are now Greensville County, Virginia, Brunswick County, Virginia, and Northampton County, North Carolina. Their settlement was also midway between two forts built for the Indians by Virginia, and about 10 miles south of a third fort, near modern-day Purdy, Virginia, that was apparently built by the Indians themselves, probably for defense against Iroquois raiders from the north. More precisely, the community’s land was located south of modern Emporia, Virginia (Greensville County), west into Brunswick County, and extending across the State line into the northwestern corner of Northampton County, North Carolina and to the Roanoke River. Researchers for the OBSN have documented the development of this community from the late 17th through the early 19th centuries, by which time emigration to the Midwest and other parts of the South had reduced it to a handful of families.
Labels: Native American Occaneechi Band of the Saponi Nation. OBSN Pow Wows