I was excited to hear Home Makeover was coming to NC, and especially to Fayetteville. It was such devestation and sadness after the tornadoes hit in April, that the community needed something like this to help rally them together. They had a concert at Festival Park, and everyone is so thrilled and happy that this is happening. I tell you what that house on Langdon Street is going to be a tourist attraction for a long time to come.

I had originally signed up to paint or hammer something, that's what I wanted to do. HA so they must have known that I am not the world's greatest painter. But I have a degree from the Academy of Art in Interior Design/Photography LOL, so I can design the heck out of something LOL! So after a few weeks I got a letter turning me down but Carolyn at the BR Log Cabins, contacted me and asked if I would like to volunteer in their VIP tent! YES! They asked me to get a list of women together for this event and I did to work 5 days in their tents. So I had an abundance of volunteers I had about 75 people that signed up and I could only use 7 at the most. So our task was to greet VIPs, and make sure they were comfortable.

I am no stranger to volunteering and I have to say that I know Barbara Marshall personally. She is a veteran and saw a need for women homeless veterans and their families. So many of these women come home and don't get a chance to de-stress, and are automatically pushed back into the mother role, or caregiver role. After seeing the need that my husband needs to De-stress before stepping back into his role as dad, I know he needs this time and so does anyone who has been in a combat stress situation. So often I have seen so many women who are soldiers who aren't given this time to relax, get acclimated to their home life. This is really great that they picked her and her organization to help out. I have met with her in the past few years to reach out to her as a Veteran. I heard about her three years ago, and I did just that reach out to her. I let her know I was here in the area and my concerns were veterans and military issues and how could I help. 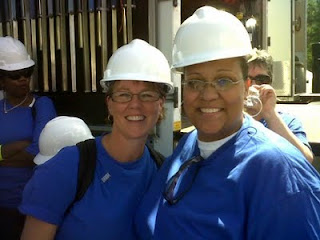 Being able to work on this house has been a totally awesome experience. I originally signed up at the extreme home makeover, but I also contacted Blue Ridge Log Cabin Homes directly. I didn't originally go to the door knock because there were an abundance of people, Army Soldiers, citizens, officials, production crew, just too many people, and I just got home from LA that morning too. Even though I wanted too, it was just too much going on.

WORKING AT THE SITE
So my days to volunteer were Saturday and Sunday. I got there Saturday evening, and was invited to do the Brave Heart Walk and cheer on the new arrival of the first part of the house. That was so exciting. I got to meet the designer John and even saw Paulie. So in the tent, I was the major greeter for the VIPs for Blue Ridge Log Homes. I met Chip Smith who is the President, Carolyn, and a whole bunch more, I also met the family of Chip. They were all so nice and just down to earth! This is such a nice thing to do, and I know building a home pretty much free of charge has got to be really expensive and I just want to say Thank You to Blue Ridge Log Cabin Homes for doing this. The coordination of logistics, and everyone has just got to be OVERWHELMING! However they are handling it with such grace and charm. I wanted to meet TY, but I tell you what he wasn't there the days I was volunteering, I wasn't too bummed about not meeting him, maybe in the future. It has been super hot here in Fayetteville and the last few days heat index was in the triple digits. It is easy to get a heat injury

Even before I became Army Spouse of the Year by Military Spouse Magazine, my volunteer efforts have run deep. I have been volunteering for the last 11 years, when I signed up as a new spouse in 3-69 AR to AFTB classes. Now I have gotten a new vision, and starting to mentor spouses, as I connect to the spouses here at Ft Bragg, it is such a nice experience and I can just say I feel pretty good about myself. When I say volunteer, I don't just mean on the military installation where we are living. I have  volunteered at the local Girl Scouts having two troops (Brownies and Juniors) we did great service projects, once we went to a Senior Citizen's Home, we held a canned food/clothing drive, there were a lot of projects we did to try to help give back. I wanted my girls to know the feeling of helping others out.