Who wouldn't want to be at the World's Largest Baby Shower! 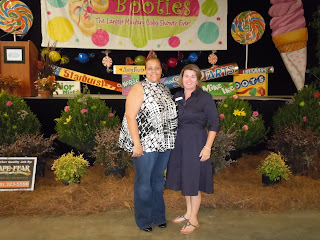 Being the 2011 Army Spouse of the Year by Military Spouse Magazine, it opens a lot of doors that would not necessarily get opened. You get to really do a lot of volunteer work and outreaching to military families which I LOVE! I met so many incredible women, it just makes me so excited to see all these mommies! I am so lucky to be living in one of the best military friendly counties in the state of NC. Let me tell you how much Fayetteville cares about the military community. On Saturday June 25, 2011 I was lucky enough to volunteer with Fayetteville Cares. I was a table hostess for 5 of the 143 tables at the Crown Coliseum Expo Center. 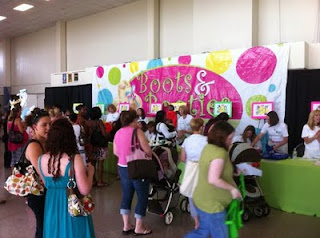 So are you wondering what it was about? Well it was the World's Largest Military Baby Shower, "Boots and Booties" for 1000 military spouses who have recently had a baby or is about to have a baby! How exciting! My tables were numbers 16-20. I think I had the best tables in the entire Expo Center. So I arrived at the event at noon, and got my assignment of what I had to do. So I was watching the mommies arriving, and being so excited. I ushered them to which ever table they liked and chatted with each of them. I wanted to make sure they felt welcomed!  Seeing all these mommies and some newborns almost made me wish I was pregnant! HA! Whew that was a close one I did come back to my senses, after having just finished potty training my last child I AM SUPER EXCITED for school ages kids!
Jenny Beaver of Fayetteville did a SUPER AWESOME JOB of decorating this Expo Center, cute candies decorated the stage. Let me describe the room, it was colored very brightly. The tables were bright pink, green,and orange. They had two types of door prizes, ones with red tickets and one with blue tickets. The blue tickets were for big item prizes like a changing table, a Disney rug and other items. The red ticket items were for things like gift certificates, day spa prizes, photography packages and things for the babies. For about an hour the ladies walked around dropping tickets in the door prizes they wanted to win. So around 2:30pm the event started, Joanne Chavonne and Kirk DeViere the two co-chairs kicked the event off, which was followed by George Breece and two speakers from the military LTG Mullholland and the Pope Army Airfield Commander. We also had a surprise speaker, LTG Helmick taped a message to our Army spouses! I went up to LTG Mulholland and he remembered me from working at USASOC as an intern and gave me a COIN! I was so totally blown away by his niceness and down to earth personality. I also met Mrs. Mulholland and she was super sweet too, this was my first time actually meeting and talking to here in person. I also saw Melissa Helmick and Theresa Sicinski. They are really so supportive of spouses! 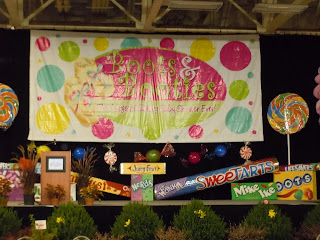 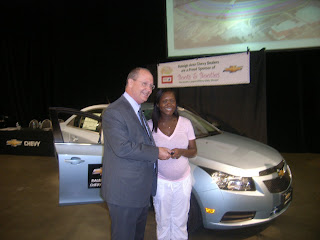 They started calling out winners to raffle tickets. So far no one won. Then around 3 pm we started playing Baby Bingo! Which was pretty existing, mommies left and right calling out Bingo! I was lucky one of the mommies at my table 16 won a round of Bingo. Then about 20 gift bags later, we were back to calling out raffle tickets. As I walked back and forth to make sure all my mommies were ok, they were excited about the car raffle. So right in the middle there was a surprise gift. They announced will the ladies at table 20 stand. Then Mr. Breece announced that since Billy Taylor the manager at the Goodyear Tire plant was there for 20 years, he was giving everyone at table 20 gift certificates for 4 brand new tires worth $1000 each! Talk about LUCK! That was two of my tables had won something! That was AWESOME! Fayetteville really does care. So after reading the door prize raffles, the main event was the CAR....Thanks to the Raleigh Area Chevy Dealers for their donation of a 2011 Chevy Cruze and to Mike Lallier with Reed-Lallier Chevrolet for his personal support of this event. And the winner is Lauren. Yeah CONGRATS! Man she started crying, and man I was so feeling the emotion! I was so touched and happy for her! I could so totally use a car, free of payments too. So immediately after the drawing the ladies were told to get the cards at their seats and go get in the lanes out back because they had ANOTHER SURPRISE!!! Each mommy got a number and each number corresponded with a storage container and a huge prize inside, from a baby monitor to a infant car seat! Who wouldn't want to be pregnant an get all this AWESOME stuff.
Labels: Boots and Booties Fayetteville Cares Joanne Chavonne Kirk De