They' re back the ghouls and vampires, the ghosts and spirits and even more terrifying entities. And wherever these evil beings are, you'll find brothers Sam and Dean Winchester, hunters on the trail of the demon who murdered their mother…and of any other unholy agent of the Supernatural. Join the brothers in their mind-bending, bone-chilling Season 2 road trip across America a journey deeper into the mystery of their own destinies. 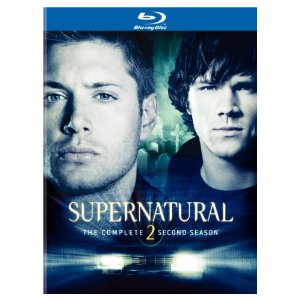 What is your favorite monster that the Winchester brothers have battled and why?

It would have to be vampire episodes!

If you were to come face to face with that monster, what would you do?

So as I sit back and reflect on this question, I love to watch encounters with Vampires. I only choose to read the nice ones, that end well. As in anything I don't like to read about darkness and evil beings. I do believe that there are or were vampires, and whether they exist today I don't know. I had read so many stories about people who think they are vampires.

However I still hold on to my fantasy of Angel from Buffy the Vampire Slayer, or Stepan from Vampire Diaries, and even Edward from Twlight. Each year there are more movies about Vampires. When I watched the vampire episode of Supernatural about the Vampires. Sam and Dean investigate a series of decapitations and cattle mutilations in Red Lodge, Montana, and find that one of the victims was a vampire. They then run into vampire hunter Gordon Walker who Ellen warns them is dangerous. Sam is later captured by a group of vampires, and their leader Lenore  reveals to him that they have reformed, feeding only on cattle. After being released unharmed, Sam tries to no avail to convince his brother that the vampires should be left alone. However, when they arrive at the vampire's hideout, they find that Gordon has already captured Lenore. They try to convince Gordon not to kill her, but he cuts Sam's arm to tempt the vampire. When Lenore resists the temptation, the brothers overpower him. As Dean ties Gordon up, Sam takes Lenore to safety. Dean later admits to Sam that he was wrong about the vampires. This you know makes me happy! I think vampires are pretty cool! Wouldn't you like to meet pretty cool vampires who don't kill people!


Disclosure:
I have been hired by Warner Bros. WBWord division to promote Supernatural: The Complete Second Season on Blu-ray.
Labels: Sam and Dean Supernatural Season 2 vampires