The Tea at the White House with the First Lady 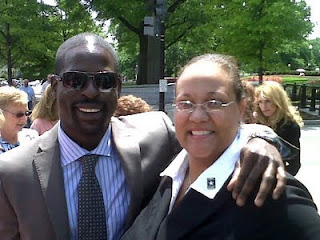 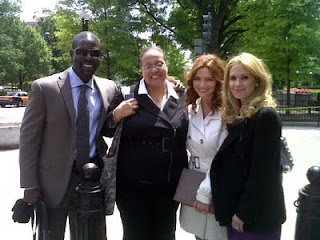 Tameka and I got to DC around 12 noon, we parked in the National Press Building, walked two blocks over to the SE Entrance. We met a few other ladies who were there. Then we saw 3 members of Army Wives Cast come over, and Roland walked right over to us, and I introduced myself to him. He gave me a hug and congradulated me, and so I asked if I could get a picture with him and he did. Then I asked if he could introduce me to Roxy and Pamela! Totally cool, so he introduced me and Pamela (Brigid) said she read my nomination letter by my husband. I was totally floored by that! WOW she read about me. That was the highlight right there. So this is a video that I took while we were at the White House. I was invited by Blue Star Families to attend the White House Mother's Day Tea with the First Lady. I invited my best friend from High School Tameka. We waited outside for about a hour. Then it was time for us to enter, so we went through the back. We walked through the East Wing entrance. Up the stairs and then we entered into the room where they had drinks waiting for us. They also told us it was ok for use to walk around and take pictures! It was a really great day. We got to sit on the furniture, tour the Green, Red, Yellow and Blue Rooms.Then they announced that the greeting line was starting. So we lined up, and I was in the front at the breaking point, where the First Lady came right out in front of me, and crossed into another room. 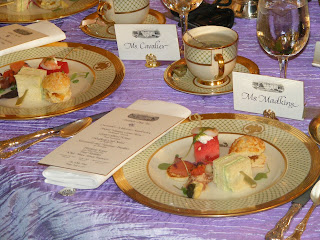 So we got in line to greet her. There were mom's and spouses from all over the US, there were Gold Star MOMs, Gold Star Wives, Active Duty spouses, everyone there was military related. It was super nice to see all these women. So I got to shake hands with her, and she actually remembered me from the Camp Lejeune visit and that I was the Army Spouse of the Year 2011 by MSM. She was really nice in person and then I met Dr. Biden this was my first time meeting her. I thanked them for their support. So we got to the room where we had our tea, we sat at table 8. Dr. Biden's chief of staff was our table hostess. She was super nice. Ms. Russell. Mrs. Shinseki greeted Tameka and I, and she was super sweet. We sat down and we ate our tea sandwiches. Then Mrs. Shinseki, introduced Dr. Biden, then Dr. Biden introduced Mrs. Obama. It was super nice. We also had these cute little cards that had our seating placements on them. It was super awesome. Mrs. Obama talked about 20 minutes then left, and we had some desserts, and then it was time for us to leave. It was super AWESOME. If you want to see more Pictures go to my Facebook page!
Labels: Army Wives Blue Star Families Mrs. Obama White House Mother's Day Tea