Picture this, "three sweet children, dressed to impress in their Easter Best." I really had the WRONG idea about the Easter Egg Roll. I was thinking that I was going up to the White House to have tea or something, and I really didn't know what to think but I was like we can't go up there in jeans and shorts. I was thinking I need a big white sun hat, and a nice outfit because I am going to the White House! HAHAHA OMG what a shock I was in for! 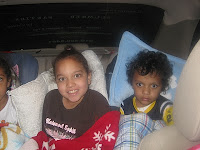 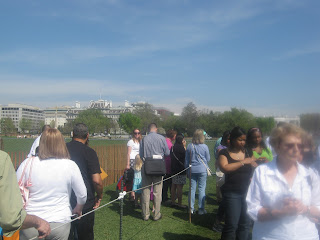 I was so honored to get the tickets from National Military Family Association! We left at 3am on Monday morning, I didn't want to spend the night and have the kids miss two days of school. So here are the kids at 3am in the mazda, hahaha B looks like a zombie! So we drive and get there around 10am, so we drive around the city and found a parking garage. So as you can tell we had on PJs, so I had to get my kids dressed. We went to a restaurant and yes in the corner my mom held up a blanket and I dressed them right there on the street. So who knew the White House was SO FAR AWAY. We parked like 12 blocks up from the White House. Now mind you I had a 2 year old, a 4 year old and a 8 yr old. I didn't bring a purse, diaper bag, stroller nothing because I was like I didn't want to not get in. So here I am dragging my kids down the street. So we reach the corner, and I am like HELLO, I have tickets to get into the White House, the guard looks at me and laughs and was like, you have to go down further to the lawn. I was like but here is the entrance to the White House...So now I was like you got to be kidding me, and yes it was in April and I was expecting it to be chilly, it was the HOTTEST day ever for April. So my cute hairdo has frizzled out, my kids are like "Mom are we there yet", and I was like no just a little further. HA was I in for a shock, as we turn the corner there is a MASS of people standing around, and I am like hello Park Rangers I am here with my special tickets to the Easter Egg Roll, and they were like yea and so are the other 7,000 people. It was a night mare, they had a football field roped off and it was curved like a snake, and it was PACKED. So we got in line, and guess what we waited in line for an hour. So just as we turned the corner my son was like mom I am tired I need a nap, and I was like where do I put you to sleep, I have nothing, so I set him on top of my shoulders and he went to sleep on my head. 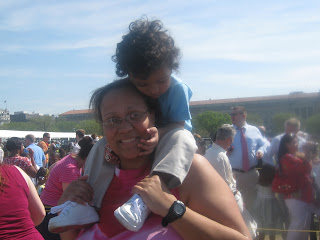 So I was like mom, I am sweating buckets and you know this line isn't moving, so finally we made it to the first gate. My mom went through and the guard was like mam, you can't go in you have a cigarette ligther, I was like throw that thing away. So she did, and we made it into the first part where they had some shows for the kids, and water. Man I was drinking like 3 bottles and now it was getting packed, and there are no trees, no SHADE! So we are in line to go in and of course there is no line there is a mass of people pushing forward. Well I am about to PASS OUT at this point and my kids are like I see Justin Bieber, it's hot I don't care about rolling no eggs I want to sit down. 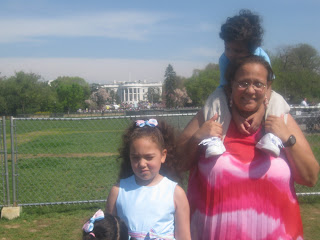 So we got our picture taken in front of the White House, like 50 feet away. So after we made the grand decision to get the stinking pink Easter Egg with the White House stamp on it, we high tailed it out of there. The guards looked at us like we were nuts. They never had anyone leave from the entrance before, and they were quite shocked that we didn't want to stay. I was like Mr, Park Ranger, I just want the egg, so I can go. I have three kids, who are hungry, hot and tired, I am hungry hot and tired and I need to sit down. 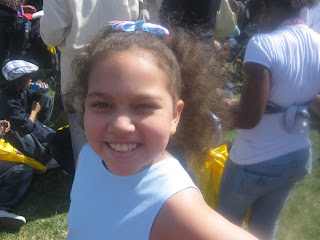 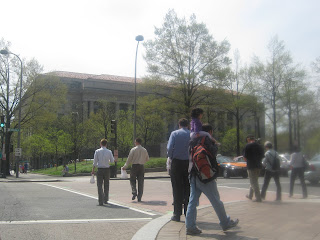 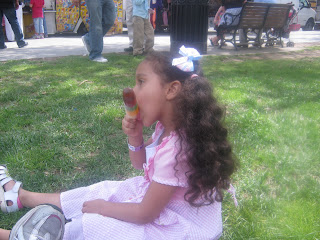 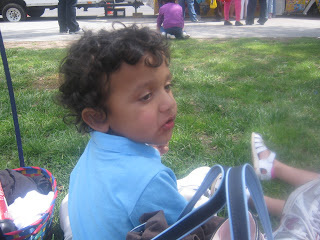 So they opened a secret gate and let us out. So as we made it to the street vendor my mom looked at me, so pissed off b/c now she had cigarettes but no lighter! HAHAA so as I bought my kids ice cream, all the park benches were taken up,S so we just sat on the ground, my kids in all their Easter Best sat in nice green staining grass...HAHAH yeah I was so threw with the situation. Then I thought, Man we have to walk up this hill 12 blocks. I was like naaa, we gonna catch a taxi. So there is a first for everything. As we caught a taxi, we sang the Nick Jr song, Riding in a Taxi for the 12 blocks to the parking garage. So after we got back in the car, we drove around the city and was looking at all the sights! So this year, we are prepared for the Easter Egg Roll, I know how to dress and what to take.