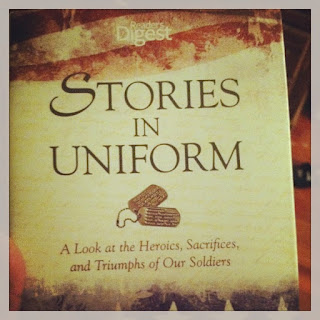 I was recently contacted By FSB Associates to review a book called Stories in Uniform. Since Memorial Day is at the end of the month, I thought this would be a perfect read to help us remember the sacrifices our military has paid.

Reader's Digest released Stories in Uniform: A Look at the Heroics, Laughs, Sorrows, and Tragedies of Our Soldiers on May 2, 2013.


Let me tell you I have skipped around the book, reading the Chapter: War on Terror first, then I started at the beginning. The story: The Men He Left Behind, wow all I could say is wow, I just really feel it, I have been married that long to my husband, and I could just empathize with the family. Just heart breaking and wow it still brings tears to my eyes just thinking about it.

I just want to say that maybe since I am/have/been through this, it was hard not to read without having so much emotion. This collection of touching short essays serves as inspiration, provides laughs, and will tug at your heartstrings. I am sure if my grandmother read this especially about World War II, she would have the same emotion that I am feeling because that happened during her time, and my grandfather was serving in the war. I almost wish I could have gotten the chance to have spent time with my great-grandmother's to ask them how did they feel when their son's were serving in WWII, something a connection that we don't have.
From boot camp to combat, a collection of Reader’s Digest’s unique, emotional, and wide-ranging coverage of military life.
Stories in Uniform is a chronological retrospective of the best military pieces Reader's Digest has run; pieces that will make you weep, make your heart sing, inspire you, enrage you, and make you laugh. Beginning in World War I and continuing though to the war in Iraq, readers will follow soldiers into the trenches, peer in on emergency surgery taking place in the depths of the ocean, watch heroes carry the bodies of fallen brethren, trail Eisenhower for the three days leading up to D-Day, and be inspired as men and women rise above and beyond normal human limits to preserve our rights and save their friends.

Stories include:
This book gives a complete perspective on the hell that is war, the love that grows from camaraderie, the pride from accomplishing the impossible, the humor that springs from the military bureaucracy, and more.

About Reader's Digest
RDA is a global media and direct marketing company that educates, entertains and connects more than 130 million consumers around the world with products and services from trusted brands. With offices in 43 countries, the company reaches customers in 78 countries, publishes 91 magazines, including 50 editions ofReader's Digest, the world's largest-circulation magazine, operates 78 branded websites and sells 40 million books, music and video products across the world each year. Further information about the company can be found at www.rda.com.For more information please visit http://www.rda.com, and follow the author on Facebook and Twitter
Link to Amazon