This is the SWEETEST story I have read in a while.  I am so proud that this mom and son are doing something and especially at West Point. No my husband isn't a cadett or product of WestPoint, but I think that is a FINE military school, and I only hope my son attends that institution of learning. Heck I WOULD LOVE TO BE A PROFESSOR there in political science or something... (hint, hint, for you people reading this at WestPoint)


A mother from Rush Citty finished a run at the nation’s oldest service academy in New York. Bonnie Carlson beat the nerves that tried to shake her by finishing the Cadet Moms Inaugural 5k Run on Aug. 25 at the United States Military Academy at West Point. Accompanying was her 21-year-old son Houston Carlson, a West Point cadet and 2010 graduate of Rush City High School.


It was a good day for Carlson and the other 80 or so West Point moms who helped raise money for Fisher House, an organization that provides housing for families of service men and women during recovery and treatment at military hospitals nationwide. She raised $2,200, with the help of 41 donors, representing one of the top amounts among the run participants. In all, $50,000 was generated for the cause.

The moms also ran to honor wounded military who have served the United States as West Point graduates. 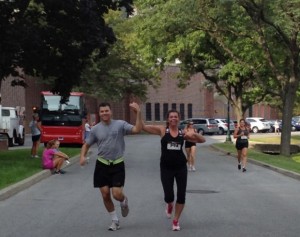 She said she was nervous but she had trained hard, having entered four 5k (3.1 miles) runs earlier in the summer.

Still, she found great reward in participating in the event, as it allowed her the unique opportunity to spend some one-on-one time with her middle child who lives so far away. She saw first-hand, too, the man he is becoming. (this part right here, how she sees how he's become a man, aww tears, I think of my son and he's only 5)...She was touched by the folks from the Fisher House organization who showed up and cheered on the runners from start to finish. She was touched by the financial and emotional support that she received from family, friends, local businesses and even strangers.

Her son wants to be in the infantry division, and I can just feel her emotions. I only have my husband in the military now, and I understand the emotion it takes when he deploys, but I can only imagine the emotion you have when your CHILD is in harm's way or taking unexpected adventures..

The Cadet Moms 5K Run is expected to become an annual event, and Carlson will be there to give back whether in a supporting role or an organizational one.
Labels: Cadet Moms Inaugural 5k Run Fisher House fundraiser Houston Carlson Rush City United States Military Academy West Point wounded soldiers