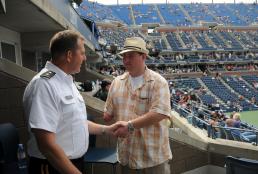 During this year’s U.S. Open, representatives from the U.S. Tennis Association and military leaders from all branches of service discussed current and future support for Ashe’s comrades-in-arms at the stadium that bears his name.

Lesniak and Tim Richardson, USTA military outreach consultant, discussed various ideas on how to best support Army Reserve Soldiers and family members through opportunities related to tennis. While no formal agreements were reached, the pair shared a common vision on how to best achieve their goals
Benefits the USTA can offer Army Reserve soldiers and families include more than 1,500 community tennis networks across the country that can help engage and integrate soldiers and their families, free recreational coaches workshops for installations, free 10 and under memberships for military children, gifts and grants for improvements to military tennis facilities, and USTA tennis professionals and volunteers who can provide tennis therapy clinics and camps for wounded soldiers.

Helping wounded warriors has been a primary line of effort for the USTA’s military outreach program. In 2011, the organization hosted Wounded Warrior tennis programs at six locations nationwide that impacted nearly 1,000 service members.

During this year’s U.S. Open, a dozen wounded warriors were honored as part of Military Appreciation Day Aug. 3, to include Army Spec. Ryan McIntosh, who is serving as a ball person during the tournament despite losing his right leg in Afghanistan.

“Linking up the USTA with our Employer Partnership Initiative, now known as the Hero 2 Hired program, provides an opportunity to have a viable partnership, whether it’s full-time or part-time jobs in the future, similar to what we saw today with Ryan,” Lesniak said.

“The other good linkup would be with our Family Programs, because that gives us access to families through the Yellow Ribbon Reintegration Program, through local units’ family programs, and through installations because they have morale and welfare activities and may have tennis courts we can use to foster this interest,” he added.

While the USTA is just beginning its formal relationship with the Army Reserve, it has several years of history supporting the military as a whole. In 2011, the USTA offered a wide range of support to the military, to include hosting 13 pre-deployment Yellow Ribbon tennis carnivals in six states impacting approximately 10,000 service members and families, donating 300 tennis equipment kits to deployed service members, adopting more than 100 deployed units and providing themed with care packages, and hosting five military appreciation events during the Emirates Airline U.S. Open Series.
Labels: Tennis US Army Reserve USTA