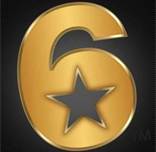 So yes I KNOW it is "I got your back", I personally like NCIS Tony saying "On your 6, boss". Gosh I love NCIS, I totally have my mom into it now...I know what she is getting for Christmas!!! OK SO here it is want to know what is going on before the Presidental National Conventions???HMMMMM

So now I am aimed at bringing you information on military charities, and voting, well so I was contacted to let you all know about an Exclusive performance by Wyclef Jean during Republican National Convention, with Special Guest & Author Meghan McCain on August 29, 2012 10:00 p.m. – 2:00 a.m. at Glazer Museum, 110 West Gasparilla Plaza Tampa, FL 33602, with Meghan & Cindy McCain, and music by Wyclef Jean.

In addition to the Tampa event, Got Your 6 and The Mission Continues previously announced that red-hot, Grammy-nominated artist Flo Rida will light up the stage at the Got Your 6 & Lifetime Television event during the Democratic National Convention in Charlotte, NC on September 5, 2012.

As part of an ongoing effort to create opportunities for U.S. military veterans reintegrating into civilian life, Got Your 6 and Lifetime Television’s Your Life. Your Time. Your Vote. campaign will throw a pair of gala concert events during the upcoming national political conventions.

Music legend, Wyclef Jean will headline the Got Your 6 & Lifetime event in Tampa, FL on August 29, 2012, during the Republican National Convention.  Special guest, Meghan McCain will be signing copies of her new book America, You Sexy Bitch.  The event also features veteran-focused nonprofit, The Mission Continues, a lead partner of the Got Your 6 campaign.

All proceeds raised during the events will benefit Got Your 6, which collaborates with more than two dozen non-profit activation partners dedicated to supporting veterans via programs focused on Jobs, Housing, Education, Family, Health and Leadership. Lifetime Television’s Your Life. Your Time. Your Vote. campaign leverages the network’s media assets to encourage women to vote, lead and run in the 2012 election and beyond.

Variety is the media partner for both events.

ABOUT GOT YOUR 6
Got Your 6 is a campaign designed to change the conversation in America such that veterans and military families are seen as civic assets and leaders who will reinvigorate our community. The campaign combines the reach and resources of the top American entertainment studios, networks, guilds and agencies with the expertise and commitment of more than two dozen non-profit organizations. Through an extensive media footprint and a set of substantial service commitments, Got Your 6 will ensure successful reintegration of veterans into civilian life. In addition to its entertainment partners, Got Your 6 also enjoys the support of organizations such as, Goodwill Industries and University of Phoenix. For more information, visit www.gotyour6.org. ServiceNation is the organizing body and fiduciary agent for Got Your 6. The campaign is managed by Propper Daley.
ABOUT LIFETIME
Lifetime Television is committed to offering the highest quality entertainment and information programming, and advocating a wide range of issues affecting women and their families.  First launched in 1992 and continued through every presidential election cycle, Lifetime’s signature election campaign -- Your Life. Your Time. Your Vote. -- is our country’s only nonpartisan effort dedicated to amplifying women’s voices in the political process, encouraging them to register to vote, speak out on the issues they care about and run for office. The network posted major growth in viewership among the key demographics in Second Quarter 2012 versus Second Quarter 2011, posting a 13% jump among Women 18-49, +5% among Adults 18-49 and +1% in Women 25-54.  Additionally, among Women 18-49, Lifetime marked the network’s strongest 2Q growth in 10 years.  Lifetime Television®, LMN®, Lifetime Real Women® and Lifetime Digital are part of Lifetime Entertainment Services, LLC, a subsidiary of A+E Networks.  A+E Networks is a joint venture of the Disney-ABC Television Group, Hearst Corporation and NBC Universal. For more information, visit www.mylifetime.com and www.mylifetime.com/yourvote2012.

ABOUT THE MISSION CONTINUES
The Mission Continues challenges veterans to serve and lead in communities across America. The organization was founded by former US Navy SEAL Eric Greitens in 2007 when he returned from his final deployment to Iraq, fueled by the deep belief that veterans are civic assets.   The Mission Continues offers six-month community service fellowships to veterans, awarding over 360 fellowships to date.  The organization does not offer charity; rather, it challenges returning service members to utilize their tremendous skills and leadership to continue serving our country at home.  For more information, please visit http://www.missioncontinues.org.