Sorry I don't usually post two topics in a day, but I figured this is important, it's free you can do this with the entire family, while eating marshmellows or drinking wine celebrating your 12 year anniversary. Early I was reading a story and the point of it was, while we may want those high tech gadgets and get them, after a while it becomes boring to us, but when we make those family vacations or daycations, we create something that lasts a lifetime memories, you can always recall those great family moments, but those high tech gadgets usually gets outdated or we loose interest...ANYWHO that's my moral for today and why I am interrupting your daily schedules with TWO BLOG POSTS.

While I was in college I worked in the Physics Department and I learned a few things or two about physics and astronomy. That sounds kinda impressive, "Astrophysics".  So I am a NASA nerd, I love the space program, I love going to NASA in FL, I loved being able to go to the Shuttle Launch with my kids!

My goal is to let me kids watch the meteor showers tonight. The annual Perseid meteor shower peaks tonight into early Sunday morning and if the sky above you is clear you are sure to enjoy a spectacular astronomical show. While the Perseid's are the main billing tonight, there are a few other players on the stellar stage. So you say WHERE IS IT? I found this cool graphic below for you to see. Look to the east early tomorrow morning before dawn as Jupiter, then the moon and finally Venus will rise, creating a nice diagonal line. Of course with any of these events in the sky the weather is the most important variable.
It won't matter how great the meteors are if it's overcast. Much of Texas, the Ohio Valley, Tennessee, the northern parts of Alabama, Mississippi and the Rockies look to have favorable sky conditions. parts of Florida and a good deal of the West Coast will also be mainly clear. But this year's display is expected to be especially spectacular due to a number of factors, including a crescent moon. At the shower's peak, the shooting stars could arrive a a rate of as many as 100 per hour, according to NASA


SOMETHING TO DO WITH THE KIDS 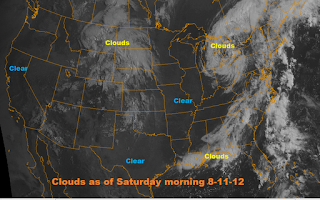 If you are watching the show with kids you can have them try to find a satellite while waiting for a meteor. What is a satellite? Satellites are quite easy to spot as they look like shooting stars but move across the sky at a much slower speeds. It can take a minute or more for a satellite to cross your field of view.  Tonight going into the earlry hours on the 12th, expect about 25-60 meteors per hour. You won't see the meteors evenly spread out over time. You may see nothing for five minutes and then four or more in a row a minute later. Lie on a blanket and look up rather than stand. If you stand with your neck tilted up, you will have neck issues in the morning. On Sunday night, heading into the morning of the 13th there will be fewer meteors per hour, but still a nice show. The best time to see this will be around 2AM-3AM TONIGHT, but if you don't want to wait till then it's still worthwhile once it gets dark. 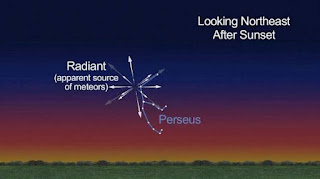 So if you want you can help capture data for NASA.  You can download an app "Meteor Counter" for free in the Android Marketplace and Apple's App Store and then report the data. You can even "Tweet" your findings using the hashtag symbol # and the keyword perseids.