ARE we on the BRINK of poverty

I have been talking about this subject with a couple of friends and yes, it is a HUGE gap that people are not seeing or it's not clicking in their heads. YES you! Usually you strive to gain the next step, going from poverty to middle class, or middle class to the upper level. You usually don't go from poverty to upper class. But you can fall from upper class to poverty in the blink of an eye! Check out these stories below. Nearly one in two Americans is now living on the lower end of the income scale, according to the Census Bureau. For a family of four that's less than $45,000 a year. These are three families who are falling out of the middle class.

The U.S. Census Bureau breaks down the reported household incomes into quintiles (or five divisions). In 2007, the middle quintile reported an income range of $36,000 to $57,660. Many economists and politicians alike believe this range is too narrow to encompass the true middle class of America. Therefore, a more generous range would include the middle three quintiles, which makes the range from $19,178 to $91,705. This range accounts for 60 percent of all households, and with the lower end balancing near the poverty threshold, this range may not be completely accurate.

Tell me what are we going to do about it? With jobs here in the US going to other countries and being outsourced. Really? These Top Corporations whose VP, or President's are born in the US, are sacrificing their fellow citizens to save costs. Talk about moral and ethical dilemmas.

Check out the stories on YAHOO

By Poppy Harlow | CNNMoney.com – Fri, Feb 3, 2012 1:28 PM EST
Nearly one in two Americans is now living on the lower end of the income scale, according to the Census Bureau. For a family of four that's less than $45,000 a year. These are three families who are falling out of the middle class.

Photo: CNNMoneyOne bedroom for a family of five

Previous pay: $110,000
Current pay: None
Where they live: Staying as guests in a friend's home

Talia Mobley and her husband Adam have been out of work for more than two years. Adam was a lead technician for Comcast and says, "I had it made." Talia worked in customer service.

Collectively, they have sent out 500 resumes but have not gotten one job offer.

Talia went back to school to retrain as a Certified Medical Assistant because she heard health care is where the jobs are. But she still hasn't been able to find work.

Fifty percent of the unemployed in New Jersey have been out of work for more than six months, and it's a similar story in Florida, Illinois and Nevada, according to the Brookings Institute.

This family of 5 represents what it can look like when the bottom falls out of the middle class.

Unwilling to show their faces, they still wanted to share their story. The father used to make over $100,000. But then his 6-figure, telecom job of 20 years went to India.

They haven't paid their mortgage since 2009 and wake up each morning wondering if today will be the day they are evicted. 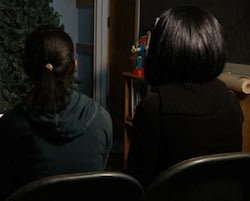 Photo: CNNMoneyNot living in poverty but not making it

A mother and her three children in Bergen County, N.J., now call a shelter home. Too ashamed to show their faces, the mother says, "I never thought in a million years I'd be at this point."

But when she lost her customer service job, she could no longer pay the rent in a county where the median household income is $77,000.

The manager of the shelter sees more and more families like this -- stuck in the middle. Not living in poverty but not making it either.

Since we first met her, the mother has been re-hired by her previous employer working in customer service, but only part time.