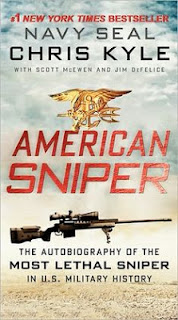 I was offered a chance to read this new book and do a GIVE AWAY....I was contacted by William Morrow/HarperCollins Publishers about reviewing the book and they were super excited to announce a new memoir from the most lethal sniper in U.S. military history. AMERICAN SNIPER is the astonishing autobiography of SEAL Chief Chris Kyle, who has more than 150 officially confirmed kills. But this story isn’t just about war. AMERICAN SNIPER is also about Chris’ desire to return home to his wife, Taya, and their children. Steadfast in her support, Taya waited for Chris to return from protecting troops on the ground. When he finally did, he made the decision to retire and commit himself to the full-time job of being a husband and father. I read the book I loved it, I gave it to my husband to read, he liked it. He could relate to it, I thought it was a great war memoir for this time period. It just hits close to home.


He is the deadliest American sniper ever, called “the devil” by the enemies he hunted and “the legend” by his Navy SEAL brothers . . .From 1999 to 2009, U.S. Navy SEAL Chris Kyle recorded the most career sniper kills in United States military history. The Pentagon has officially confirmed more than 150 of Kyles kills (the previous American record was 109), but it has declined to verify the astonishing total number for this book. Iraqi insurgents feared Kyle so much they named him al-Shaitan (“the devil”) and placed a bounty on his head. Kyle earned legendary status among his fellow SEALs, Marines, and U.S. Army soldiers, whom he protected with deadly accuracy from rooftops and stealth positions. I thought Chris's account of his battlefield experiences ranks as one of the great war memoirs of all time.


AMERICAN SNIPER also honors Kyle’s fellow warriors, who raised hell on and off the battlefield. And in moving first-person accounts throughout, Kyle’s wife, Taya, speaks openly about the strains of war on their marriage and children, as well as on Chris.

SEAL Team 3 Chief Chris Kyle served four combat tours in Operation Iraqi Freedom and elsewhere. For his bravery in battle, he was awarded two Silver Stars, five Bronze Stars with Valor, two Navy and Marine Corps Achievement Medals, and one Navy and Marine Corps Commendation. Additionally, he received the Grateful Nation Award, given by the Jewish Institute for National Security Affairs. Following his combat deployments, he became chief instructor for training Naval Special Warfare Sniper and Counter-Sniper teams, and he authored the Naval Special Warfare Sniper Doctrine, the first Navy SEAL sniper manual. Today, he is president of Craft International (www.craftintl.com), a world-class leader in training and security. He lives with his family in Texas, where he devotes much of his spare time to helping disabled veterans.