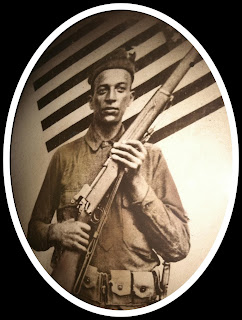 From last year's blog about 2010 Veteran's Day hopefully this Veteran's Day I will not spend it in the ER with my son (check out last year's blog post). This was my great-grandfather's (the photo to the left is John Brown Anderson, my great grandfather) and grandfather's favorite holiday. Why you ask? Easy, because it was a day that people remembered the living veterans, they got to sit around telling their stories of how it was for them in WWI and WWII. How Fort Bragg used to be, and how the USO was, and how my grandfather stayed in Nice, France and was a payroll clerk for the US Army.


This day we should remember all the Veterans of all wars past and present and the sacrifices the continue to make. Did you read my blog post about Memorial Day 2011? Veterans Day gives Americans the opportunity to celebrate the bravery and sacrifice of all U.S. veterans. However, most Americans confuse this holiday with Memorial Day, reports the Department of Veterans Affairs. What's more, some Americans don't know why we commemorate our Veterans on Nov.11. It's imperative that all Americans know the history of Veterans Day so that we can honor our former service members properly.


Did you know that Veterans Day, formerly known as Armistice Day? It was originally set as a U.S. legal holiday to honor the end of World War I, which officially took place on November 11, 1918. In legislation that was passed in 1938, November 11 was "dedicated to the cause of world peace and to be hereafter celebrated and known as 'Armistice Day.'" As such, this new legal holiday honored World War I veterans.

In 1954, after having been through both World War II and the Korean War, the 83rd U.S. Congress -- at the urging of the veterans service organizations -- amended the Act of 1938 by striking out the word "Armistice" and inserting the word "Veterans." With the approval of this legislation on June 1, 1954, Nov. 11 became a day to honor American veterans of all wars.

The restoration of the observance of Veterans Day to November 11 not only preserves the historical significance of the date, but helps focus attention on the important purpose of Veterans Day: A celebration to honor America's veterans for their patriotism, love of country, and willingness to serve and sacrifice for the common good.