The Whirlwind Romance how it started 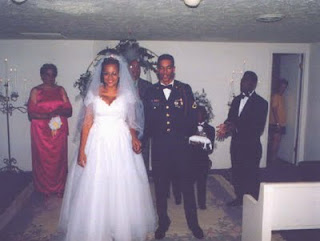 We met online...true story. We met online in Jan 2000, and I thought he was so narcissistic and was like no way! So after about 3 months of yahoo imming, he was like please just let me visit and I was like well you have to come visit me. So he came to visit me in April 2000 I lived in Greensboro NC, and he was stationed at Ft Stewart GA, we had a great weekend. He invited me to his Unit's ball in May (our 2nd in person meeting). I loved it, I fell in love with him there. It was like love at first sight, yes I know but it was different. I knew he was the one, deep down.

I had a great time with his friends. His roommate actually met his wife online a few weeks before us! So when I got to GA, he was so impressed with my car, he took me to the hotel where I was staying. He was like I am going to wash your car, so he was gone 4 hours. All kinds of things ran through my head, like OMG he stole my car, I am here in GA and I can' explain it to my parents, why I was there. Nevermind I met someone online LOL! So after I just sat there he came back, he was showing my car off to his friends LOL! So we went to the ball, and just feel in love. We just talked about everything. Then I didn't see him in June he was in the field, and then in July he got leave, so I went to pick him up, and we had a great 4th of July. He met my parents, we had a cookout and they loved him. So when I took him back to GA, he asked me to marry him! It was so romantic, we went to River Street in Savannah GA. He asked one of the street musicians to play "Here comes the Bride" to me, and asked me to marry him. OMG so ROMANTIC! I knew he was the one only after meeting him 3 times in person and dating for 3 months. He asked when did I want to get married and said you pick the month and I said August, and I say well you pick the date, and we got married on August 12, 2000. It was small, my mom and I made everything. No family attended, I didn't tell anyone except my mom. We got married at the NCO Club on Ft Bragg, she made my wedding cake. I had a dress from a Cotillion I was in in high school. 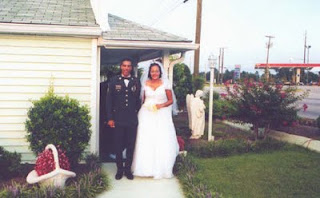 I invited my friends, he invited his. However the Army had different things in mind, they decided at the last minute to go into the field, so it was lucky enough my husband got out of the field to get married. So I didn't tell all my family just my mom I was getting married no one else knew. We got married, the day of the wedding was a huge disaster. My Maid of Honor backed out on me, and said she couldn't be happy for me because she was miserable. She also manged to be mean to all of my wedding party and "fired" my bridesmaid. So I was getting married at 6pm right, well my mom and soon to be husband was at the NCO Club decorating, I was getting my hair done. They had my wedding dress and I had his class A's. Well at 3 I was running all around Ft Bragg looking for them and they were looking for me, so at 4pm I just gave up went to the hotel and sat there, and was in shock I didn't know what to do. So at 5pm the limo showed up I was like great, "No Dress, No Groom" haha perfect. So at 5:30 my mom and bridegroom show up and you know how you say bad luck before the wedding, I was like I don't care you aren't getting out of my sight. So we got dressed hopped in the limo. My mom said she was coming right behind us. She was my maid of honor and her boyfriend was the best man.

Well traffic decided to back up and while we were at the Wedding Chapel at 6pm my mom wasn't. I told the minister that I wasn't getting married until my mom got there. So at 7pm no mom, no rings, the wedding director was like HELLO I got another wedding at 7:30. So the minister was like "this is what we gonna do". He gave us his rings, and was like ok I want them back after the ceremony. He had all my friends stepping in, and we were in the back of the chapel. I hear my mom crying really hysterically. So after that fiasco we finally get married at 7:15pm and after that everything worked out. We hopped into the limo toured the city and they dropped us off at the NCO Club. We had a great time dancing the night away. The Fort Bragg NCO Club had the best food, or either I was really hungry! But we didn't have a honeymoon, I went back to Greensboro the next day and drove him back to Ft. Stewart, and 3 weeks later I moved down there to Ft Stewart, and the rest I say is history! PS I finally told the rest of my family about 5 months later.
Labels: Army Fort Bragg Marriage NCO Club wedding