Was it a fox or coyote? 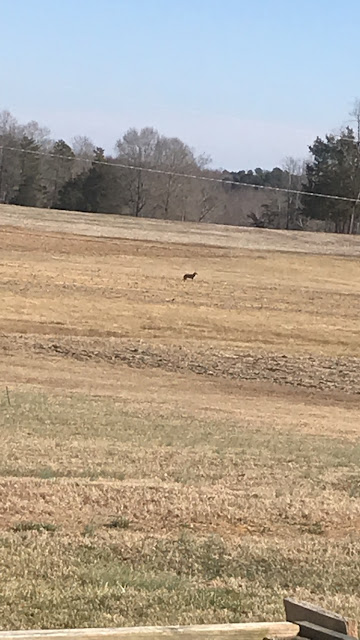 Living out here in the Central Piedmont of NC, we have now coyotes. There never used to be coyotes living here it was mainly foxes. Well now we have Coyotes, here are some tips on how to distinguish below:

The red fox (Vulpes vulpes), can be deceiving because they can actually be red, grey, black, and even white (if albino), although red is the most common. If you see a fox or coyote, but you aren’t sure which one it is... look for the “black boots”! Red foxes have black legs. They also have black-tipped ears (seen on the backsides), a white-tipped tail and a more dog-like face compared to the grey fox.

The grey fox (Urocyon cinereoargenteus) can be grey, red or brown in color, but it too has some clear markings that will help you distinguish a grey fox from its other species. This species has a black tipped tail and what I like to call a black “racing stripe” down its back. The grey fox also has a more cat-like face than either the red fox or the coyote.

The coyote (Canis latrans), is arguably the hardest of the three to differentiate. It has varied coloration, but is typically grey, brown or black. It has a very dog-like face and a long and fluffy tail. The most distinguishing attribute of the coyote is its size. It has much longer limbs, ears and snout, making it larger and taller than either fox.  It takes practice and viewing many foxes and coyotes to get used to the species differences.