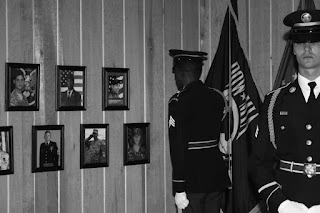 HERE is some information for you folks living in GA. I think you should stop by and check this out.The Henry County Military Museum will host the second annual Gold Star Family Day Sept. 29. There will be a public Gold Star ceremony at the Veterans Wall beginning at 1 p.m. followed by a private ceremony in the museum at the Wall of Honor for the Gold Star families.
The last weekend of September has been chosen as the time for the ceremony because it coincides with national Gold Star Mother’s Day, which is the last Sunday of September. In 1928, American Gold Star Mothers, Inc was established by the mothers of sons and daughters who had given the “last, full measure of devotion” for their country. For nine decades, Gold Star Mothers who know the depth of loss have comforted other grieving mothers and promoted patriotism and the belief that a noble life is one lived in the service of others. The Henry County event expands this recognition to all Gold Star Family members. This year Fort Gordon Survivor Outreach Services, Georgia National Guard SOS, the American Legion and the Veterans of Foreign Wars have partnered with the military museum to honor these families and provide them with an opportunity to meet other Survivors.
The museum is located at Heritage Park, 101 Lake Dow Road, McDonough, Ga. For more information, call 478-284-2766.
Labels: Gold Star Families Gold Star Mothers Henry County Military Museum Veterans