Once and Eagle....always an Eagle 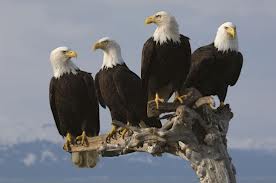 Just a little tid-bit for you...I am into nature, and I love this stuff....So this past winter when I would take the train home to Fredericksburg VA we would go through Quantico, and I noticed that on the ride home right before Quantico and immediately after I would see these huge nests and I noticed OMG they are Bald Eagles. I have never seen Bald Eagles in the wild before and I would love to watch them flying. So today when I was out with my kids, I decided to stop by the commissary at Quantico but while I was at the USAA Financial ATM Center, I heard this bird call, and I was like that sounds like an Eagle, so I looked around and looked and up high and it was a EAGLE, I would thought it was a momma eagle but I don't know which it was..But it was SURELY amazing to be really close to this eagle and hear it making it's call...

PS my high school were the Eagles, once and eagle ALWAYS an eagle

Here are some eagle fact sheets,