Red Baron..... Heroes Beyond the Battlefield

Have any of you seen the new move coming out called "The Avengers" with Captain America and the Hulk, etc? It is like all my comic book dreams from being a kid are coming through. (Yes as a girl in middle school, I loved comic books, it all started with Batman. I wanted to be the one Batman rescued, lol. From there it was X-Men and Spider Man). So you know my love for these companies who are giving back to the military community and OMG Red Barron, is the BEST! I love their pizza, and you know I remember eating these pizzas as a child. They are a really GREAT company and affordable too. Another plus in my book especially when you have a large family! 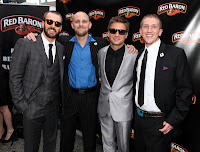 I love reading about companies who are doing things for wounded military personnel. I was recently contacted by Anne from GolinHarris for Red Baron about this great new program them have called “Red Baron Heroes Beyond the Battlefield”.

Two military members got to attend this premier and I have PHOTOS for you to look at!

In partnership with the Wounded Warrior Project (WWP), Red Baron honoroed Army Specialist Jason Braase (Ret.) and Marine Corporal Adam Harris (Ret.) as part of their “Red Baron Heroes Beyond the Battlefield” program. As recipients , both real life heroes attended the world premiere of “Marvel’s The Avengers” in Los Angeles on April 11.

Braase was an armored crewman in Kirkuk, Iraq from 2004 until June 2005 when he was wounded by an Improvised Explosive Device (IED) while assisting an Explosive Ordnance Unit (EOU). Thanks to surgeons, doctors and nurses at the medical facilities in Iraq, Germany and the Walter Reed Army Medical Center, Braase still has use of his leg.

Harris served multiple tours in Iraq for the Marine Corps from 2003 to 2007, including time in Ramadi as a combat infantry rifleman with the 2nd Battalion of the 5th Marines and Habbaniyah with the 1st USMC Explosive Ordnance Unit (EOD). After engaging in numerous direct combat actions and witnessing the loss of life of fellow Marines, Harris ended his military career as a decorated “warfighter.”

The WWP alumni were chosen to be honored because both have demonstrated heroic qualities by not considering their injuries as limitations and taking the initiative to create new endeavors to help others. These “battle buddies” met at a recovery facility in Boise, Idaho and will have all their red carpet experiences captured by an AP photographer.