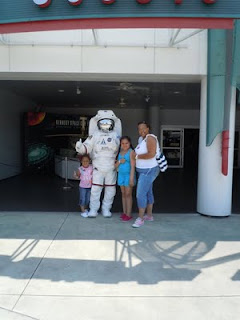 So the next morning was our TRIP to NASA! Our bus was ORANGE, there were quite a few people from NC. It was pretty exciting, so my two girls and I were up at 6am, we didn't want to miss the bus! So we catch a shuttle to the parking lot. So we board the bus at 9, and we left. It took us about a hour and half to get there, however there were a few problems on the way. We had to pick up our official NASA guide off the NASA base at Publix. We had to get the official badge too, so we could be on the 'causeway'. 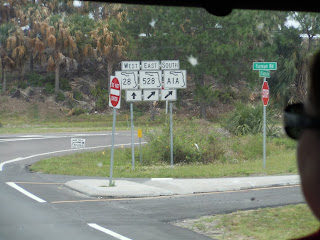 It was quite funny, we pull up an all these people start panicking that how are they going to move their cars. So two people got off the bus, and then we had to back up, so those people were thinking that we had left them, it was quite funny. So I decided that I would stay put. So we finally head over to NASA, get through the gates.So we drive down the cause way it was about a 3 hour wait. However it was pretty overcast and windy. I actually thought the launch would have been scrubbed due to the weather. So my daughters and I laid down our blanket and picked a spot. Catherine decided she wanted to pay with the other kids and Samantha decided to dig for shells. So I  read my GRE study guide. When I decided to go walking I hear the announcer saying there are some problems, we are trying to find a solution. So then I hear the launch is going to be scrubbed. So I sat there for a minute and waited, then I see all the other families packing up. So we did too, we got on the bus. I was bummed I didn't get any souvenirs. I jokingly asked if we could stop by the gift shop, and the tour guide said no. So I was like ahh we'll go back to the hotel and swim. So then they asked if we wanted to go to the Kennedy Space Center, I was like HECK YEA! So we first stood in line, and I was like wait do I have to pay, then I see a few people from the bus, so I go back there, and they gave me tickets to get in. The girls did the LEGO building blocks and built a space ship, we also let them play in the rockets, and then they played on the big slide.

So we get in and go tour the place, and go shopping and get CRAZY souvenirs! So we stayed there until 4 and then we hurriedly got on the bus! The bus driver did say if we weren't there, they would leave us! So we got stuck in traffic and got back to the hotel at 6pm. So we heard the shuttle launch was postponed to Monday, then we found out later that they postponed it until May 8 thru the 14th.