Wait My Name Isn't Pecos Bill or Is It? 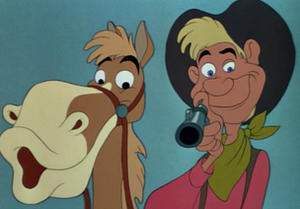 I thought we PCS away from Fort Riley, but yesterday I felt like I was back in KS again. I didn't think I was suppose to be riding a Tornado like Pecos Bill! We lived in KS, and only experienced maybe 4 or 5 tornadoes our time out there. So I am kind of used to them, but they have Sirens and you can see the tornado coming, b/c it's so flat. Here it is very tricky, the hills and trees and land make you think it wouldn't happen to here. So yesterday after the Yellow Ribbon event in Greensboro I was making my way home. There was a terrible storm forecast Thunderstorms, with a possibility of tornadoes. So at 1 it was just coming through Greensboro, heard the weather reports was suppose to hit Sanford by 3pm. So I was leaving Greensboro at 3pm and I was like I should be fine bc the weather will have gone over. Driving was great, until I got to Sanford, got past the Kmart on Hwy 87, and it was TRAFFIC backed up, stop and go. 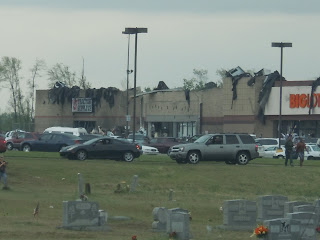 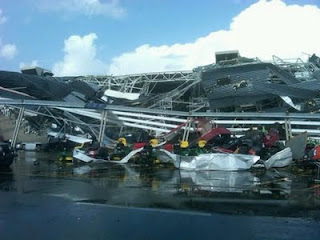 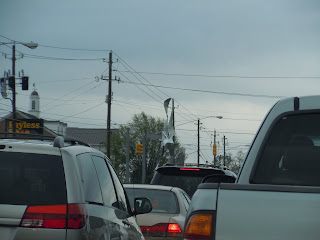 I was like WHAT in the WORLD i just want to get home b/c they were having wicked weather in Fayetteville and I wanted to get home before the storm hit. So as I was sitting in traffic, it started to get windy and just a few rain, and they next thing you know sirens going off, the metal was flying, and it was just chaos. Wait is that a tornado "a coming toward me"? OMG let me call my mom, and my cell phone would not ring the home number or cell phone but I could get on FB go figure!! LOL The Tornado had hit the Tractor Supply Store shopping center and jump across the road and hit Lowes Hardware, demolished it. Was the scarest thing so as I SAT in traffic, thinking I could get home on Hwy 87 I was re routed, so I said hey I'll take the back way home, get by Catherine's old Cheer Gym, and same thing, Tornado had come across there, traffic re-routed. SO I asked this random person how to get out of Sanford, she said go to Broadway and around, so that ROAD was shut down, after 2 hours of being in Sanford I headed West to Southern Pines, and got on Hwy 27, made it home to find out we have NO Power. We only had food that could be made in the oven, no hot dogs or burgers. LOL so after like 8 pm we had reports that Sanford, Spring Lake, Bragg and parts of Fayetteville had no power. So we went East to Lillington to get food and made it back home on the country back roads. We didn't go into the areas that had no power. So last night we had a few candles and flash lights we went right in and went to bed. Now my husband left Friday morning to go hunting and I hadn't heard from him all weekend, so won't panic until tonight when he is suppose to be home. So I didn't sleep good at all, Catherine's medicine has to be kept in the refrigerator, and I had it in a cooler with an ice pack but they all melted, and I had one left, and the power just came back on. So that was a LIFE SAVER! Whew, $4000 in medicine would have been wasted. However we lost everything in the fridge and stuff in the freezer had just begun to unthaw, I guess we should keep it colder in there. But YES we are ok, and safe and back in business! I am glad that I was totally late because I would have been right in the path of the tornado instead of down the road from it watching it cross 87. I tell you what these counties were not prepared for a Tornado we are more prepared here for a Hurricane but not tornado, it was hard on these counties here, everyone is maxed out to the fullest extent.