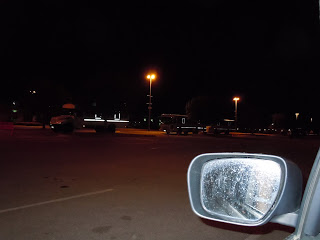 When I won Army Spouse of the Year, I felt like that title was helping me contact agencies, bc now I am someone not just a Army Spouse but I am Official now! So last week I had my casual phone meeting with  John Nicholson from the Governor's Office. I reached out to him, because of Blue Star Families, and I just so happened to tell him in March I was the Army MSOY Branch winner, so he recommended I get on the list of guest! I AM SO GRATEFUL he remembered me.
I got my email letter Monday night at 9:30 stating I was a VIP guest of the White House, because I am the Army Spouse of the Year 2011, Military Spouse Magazine.The day started at 0230 am I got up, got dressed left my house at 3am. The drive to Camp Lejeune was about 2.5 hours. The base has changed A LOT, they added a Wendy's and Dunkin Donuts, they are also doing some road changes as well. I got to the base at 5am, and proceeded to the White House VIP section. 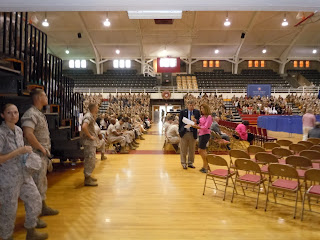 It was in the PX parking lot, there were 3 buses waiting and a man in a suit, so I said this must be the spot. I asked him, was I in the right place for VIP, he said yes. So the parking lot was filling up, we got in line and 3 more buses pulled up. There was another spouse there, so I made friends with her and gave her both cards the Army Spouse of the Year by Miitay Spouse Magazine and Blue Star Families. I told her we needed help with volunteers there, she was so awesome to talk to! Did I mention how much I love meeting people. 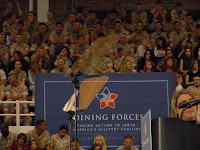 So now it was like 6am, we walked up to the check in, after standing there for about an hour, one spouse asked was this the line for 2nd Battalion, he said no and directed them to the other buses. After the mass exodus, me and this other lady were left. I was like wow! So slowly the VIP White House Guests started to arrive! It was nice, we got to sit on the bus and wait. 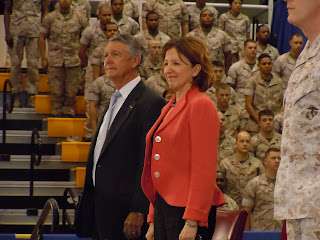 I saw so many people from Fayetteville (Eva from CCPFC, KadyAnn Davy Councilwoman, Kara from Congressman McIntyre's office, Jenny from Senator Hagan's Office,Rebekah Sanderlin, yes SHE knew me, I WAS TOTALLY shocked, she is awesome, John Ramsey from the newspaper) then people across the state, Lindsay Siler from OFA and Sarah Anderson from NC Democratic Women's.  There are people I can't even remember I am not sure if it is from being tired and exhausted from only getting two hours of sleep in the last 2 days or what. So if I forgot you I am SO SORRY! 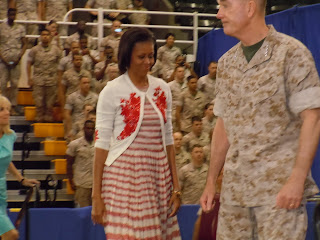 I also felt like a Star, I had my picture taken with people from NC. There was a couple from Lumberton who said they read about ME in the paper! I felt so honored that people remember my name. That reminds me a lady in Walmart in Spring Lake stopped me and asked was that me in the newspaper! LOL
Back to the story....I also got to meet the Marine Corp Spouse of the Year 2011 Bianca. She was really nice, we sat together! We got to the field house, and we had special seats at the FRONT side, right where she could reach out and touch us! 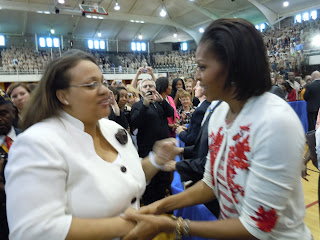 So we waited it started about 9:45am the Marine Corp Commander spoke and introduced the First Gentleman, and Senator Hagan! Then they went off stage and then they introduced Dr. Biden and Mrs. Obama. She talked about how engage all Americans in supporting military families. At a White House event they revealed their Joining Forces initiative to reconnect Americans with the military families in their communities. 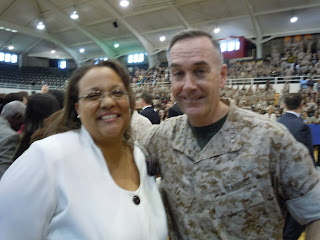 Today at Camp Lejeune was their first stop in the kick off tour! So she spoke about 30 minutes. She is really sincere, and it is from the heart when she talks, I didn't see her once use the teleprompters or look down. She said some really touching words about military families.  I know she and Dr. Biden talks to military families, and hears their concerns.  After her moving speech she walked down the stage where we could shake her hands. So she got to me, and I told her I was the Army Spouse of the Year 2011 by Military Spouse Magazine, and she shook my hand then GAVE ME A HUG! Told me Thank you and I was doing a wonderful job, and keep up the amazing work! So afterwards I spoke with the news reporter from Fay Observer and he asked my opinions as a Army Spouse on it, and I told him it was a GREAT thing they were starting and I look forward to seeing all the help we can get! 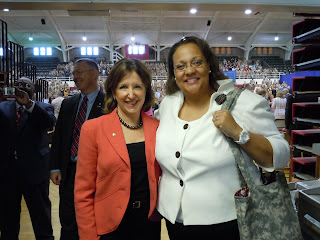 So then I met General Dunford had my picture taken with him and Senator Hagan! I was a AWESOME DAY! PS I was rocking the ARMY bag Heather made me so I could show that I was from the Army, I didn't want to get lost in a sea of OOOO-RAAHS, so I had to bring my HOOAH!
Labels: Army Spouse of Year 2011 Camp Lejeune First Lady Michelle Obama Military Spouse Magazine